Shamanic Kinesiology – Healing for the Soul 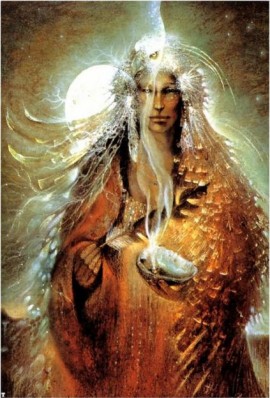 In absolute no way, do I claim to be, in any way a “Shaman”. I give my full respect to all the medicine men and woman, of the past, present and future that have been initiated into such a sacred linage and carry forth its ancient knowledge, wisdom and medicine.

A simple definition of a shaman is “a person regarded as having access to, and influence in, the world of benevolent and malevolent spirits, who typically enters into a trance state during a ritual, and practices divination and healing”. Shamanic practitioners are able to access altered states of awareness in which their soul energy or consciousness is able to perceive non-ordinary reality (a shamanic term for the spirit world) to receive information, teachings, guidance and healings.

In no better way can I impart the nature of my work than in using the word “shamanic”. It is very much about journeying into one’s own spirit and the spirit of another to find the source of suffering, pain, dysfunction and dis-ease. It’s about taking the sacred journey into the soul to find out why the issues exist, and then finding the means to remove the imprints of disharmony from the luminous energy field, then guiding the body back toward optimal health. Shamanic Kinesiology is an alchemical process which uses the 3 principles of the transmutation circle; comprehension, deconstruction, and reconstruction to achieve optimum health and wellness in mind, body and spirit.

Shamanic Kinesiology consists of a two part healing process whereby in the initial consult we do a Shamanic Kinesiology healing session to journey into the depths of the soul and consciousness, followed by a separate consultation specialising in sound and light therapy featuring specific harmonics and frequencies along with the use of bodywork. The healing power of the initial consultation focuses on the comprehension and deconstruction phases of the transmutation circle. The second consultation focuses entirely on the reconstruction phase of the transmutation circle, being the reorganisation, repair and restoration. It is well known that DNA can be influenced and reprogrammed by frequencies and vibration. In both sessions the client is held in a sacred and safe space and supported throughout their transformational journey back to wholeness.

After running a successful Kinesiology clinic for several years I felt at times, in some specific cases, the work was not penetrating deep enough, that we were not fully entering into the realm of physical transformation, despite working at a systems and cellular level. The physical can be the most densest level to shift, it can hold on tightly with somewhat of a resistance to let go. More-often it can be the hardest layer to shift. By dedicating an entire healing session with specific harmonics and frequencies via sound and colour, along with focused bodywork my work is better able to assist the client in the transmutation of more stubborn and engrained patterns that often get locked in at a cellular level and crystallise within the physical body. 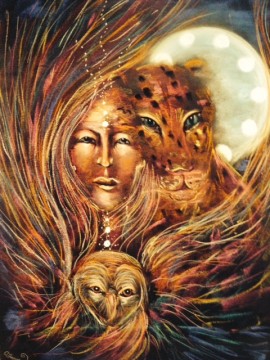 The shamanic path is being reborn at this transitional time. People are looking for something more, some greater connection, we are yearning to go back to our sacred roots and interconnectedness with each other, our earth and the universal energy that governs all life. It is my endeavour to hold such a safe and sacred space that allows my clients to go within, to reclaim their instinctual knowledge and access their own inner healer or shaman within, to move past all the veils of illusion to find out who they really are so they can experience the light of the soul, the light of one’s own consciousness. The shamanic path was one that found me, rather than me actively seeking it out. I was called to it in many different ways, including the awe inspiring integration of my power animal Meyeka, a male leopard with whom I have worked with in previous past lives. Prior to this I had little awareness of power animals or their immense power. Meyeka has become one of my most prominent healing and astral guides and journey’s with me into the realm of spirit from a place of benevolence, love and service.

What does one experience in a Shamanic Kinesiology session?

1. Journey into ones Consciousness

The first consultation is a journey into the realm of spirit where we are given knowledge as to the origin of the presenting issue or condition. It very much focuses on the soul level of the individual and what patterns they have brought in with them in this incarnation that are affecting any aspects of their mind/body/spirit complex. All types of phenomena present themselves throughout a typical session and are as individual and unique as we are. Unresolved soul patterns have a way of repeating themselves, perpetuating the core wounding in a never ending cycle that keeps us in dysfunction and trauma based responses. To alleviate the soul and its stored impressions is a far better curative agent than those modalities in which do not incorporate the soul. This initial consultation very much focuses on the comprehension and deconstruction phases of the transmutation circle. It is essential to the healing process. 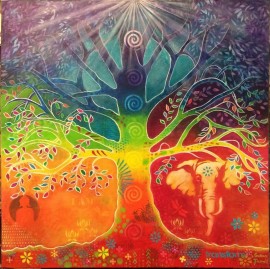 The second consultation is not at all focused on the mind or comprehension at all, its potency and medicine lies in any further deconstruction and the reconstruction element of the transmutation circle. Sound healing has a phenomenal effect on the physical and energetic body. Everything in the universe is made up of frequencies and vibrations, we are surrounded by a sea of energy which is in constant communication with our physical and etheric selves. Sound is a medium in which energies from the subtle body can enter into the physical for the use of healing and regeneration. With sincere thanks to my friend and sound healer, Steve Davies, along with other musicians, we have compiled a shamanic healing album in specific harmonics and frequencies using traditional musical healing instruments such as the African djembe drum and Kora, Australian didgeridoo, Native American flute, crystal singing bowls and crystal harp just to name a few. The healing sound journey Steve Davies helped produce and compile for me consists of 8 tracks, designed specifically for the human chakra and energy system. In conjunction with the sound therapy, light therapy is also used throughout the duration of the session. Molecular structures within the body such as DNA, RNA and proteins, respond to the penetration of light particles first within the auric field and then secondly by the etheric body transducing these frequencies into usable particles to be used for repairing and regenerating damaged biological processes within the numerous electrical reactions that occur within normal physiology. Finally I have channelled a sequence of hand postures in which bring these harmonics and frequencies into the energy systems and then into the physical body. It is a deeply relaxing therapy whereby the client often gets to experience the wisdom of the sacred and silent mind. It is in this silence that the emergence of the pure and spiritual mind is possible, it is the bridge or vehicle that transcends the barriers of ego and thought and opens a clear communication with spirit, where we enter into the realms of the unseen and eternal. The shamanic sound healing allows for greater transformation at the physical level.

The duration of this healing session goes for around 1.5 hours and is valued at $100.00. This session is typically 1-2 weeks after the Shamanic Kinesiology session.

Please read the below channelled message on why I was called to bring forth this new aspect of healing to my clinical practice and its benefits.

From the point of view from the soul’s perspective, challenges, obstacles and hardship often arise from unresolved events and traumas in the long line of reincarnation and the residual effect and imprint that has on the vibration and frequency on the physical and energetic body. To clear the dysfunction at the soul level is to pluck the problem right out of its systemic place of origin. To travel directly to the causative agent is by far, a better means of cure than is skirting around the surface and not penetrating into the depths of the embedded issue carried at the level of the soul.

The reason that this mode of healing is deemed more effective is due to the fact that patterns often have a way of repeating themselves, perpetuating the core wounding in a never ending cycle that keeps us in dysfunction and trauma based responses. To alleviate the soul and its stored impressions is a far better curative agent than those modalities in which do not incorporate the soul. The bodies the soul stores patterns as means for growth and expansion are primarily the causal and emotional bodies followed by the mental and finally the etheric and physical body.

Emotions are the primary source of confusion, powerful are these to erupt out of know where and take you out of reality and into past patterns that no longer serve you. Thought-forms are a step further again, they are cemented at a higher level of awareness and produce core beliefs. They build over lifetimes and the more energy that feeds on them the stronger they become. Breaking this pattern can become extremely difficult, especially if you are working with energies that transcend this time, that are not just limited to the now, as in this current life time.

The reason behind the causal and astral body being dominant in unresolved matters is due to the fact that impressions from these bodies are more readily and easily received into our consciousness. Thought-forms and core beliefs are less impressionable on our reality and harder for us to form an awareness of. Healing involves a two part process whereby soul issues can be resolved in the light of transmutation, along with their strong emotions and thought-forms that have entrapped the soul in the dysfunctional patterns for often lifetimes. Secondly those energies in which have filtered down through the subtle bodies and to the physical body often need a more focused approach due to their density in nature, this is where the sound and light healing combined with focused body work is a powerful and more integrated approach to healing.

Molecular structures within the body such as DNA, RNA and proteins, respond to the penetration of light particles first within the auric field and then secondly by the etheric body transducing these frequencies into usable particles to be used for repairing and regenerating damaged biological processes within the numerous electrical reactions that occur within normal physiology. The light frequencies of the visible colour spectrum radiate intelligent energy that the life force interprets, then sends out specific instructions for the healing and regenerating of the physical body. Each colour frequency has specific healing qualities imbued with cohesive information on how best to utilise the radiation for healing purposes. We are using energy systems that have intelligence and lifeforms of their own, and when interpreted by the body can produce remarkable healing effects on the physical and energetic body.